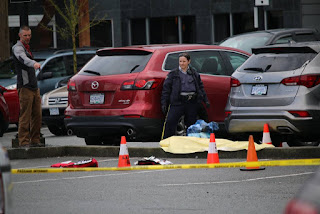 The Langley Times is reporting that "One person is dead following a shooting at a Langley hotel. The male victim was in an SUV in the parking lot of the Sandman Signature hotel at 8828 201 St. around 2 p.m. this afternoon (Saturday) when shots were fired. He died of his injuries at the scene." Global posted a news video about the incident.

The Langley Times is reporting that IHIT announced that the victim in the shooting was 20 year old Tyrell Michael Sinnott from Surrey. He had a criminal record and was involved in the drug trade.