The Launch of the Surrey Now-Leader 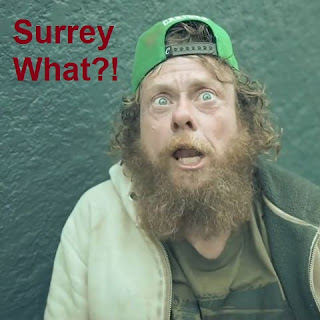 There are several news stories for me to catch up on over the weekend but I just wanted to throw this one out there to set the record straight. It turns out that my goddaughter was right - the Surrey Now and the Surrey Leader have merged into a new single newspaper. The new paper is called the Surrey Now-Leader.

Under the headline Welcome to Surrey's new voice it states: "Welcome to the first edition of the Surrey Now-Leader. With this first issue, Black Press has begun the transformation of the community newspaper model in Surrey by uniting two iconic tittles - the Now and the Leader - under one new umbrella. The goal is for us to be the best digital and print newspaper in Canada."

It sounds good but they don't have their new website up and running yet. I'm sure that's on its way. As I said before, it doesn't sound like a merger. It doesn't even sound like a hostile takeover. It sounds more like a corporate monopoly eliminating all the competition. The new office for the new paper is in the old Surrey Now building. The Surrey Leader building and staff have been eliminated with one sweep of the pen. It looks like the corporate monopoly completely got rid of the Surrey Leader and put their name on the Surrey Now. The Surrey Leader was indeed iconic.

As I said before, the death of the Surrey Leader has created an opportunity. If the staff from the Surrey Leader who were fired want to start their own company and create an online digital paper, I'd be all for it. I support local news. Imagine a local newspaper free to tell the truth without having to worry about pleasing big brother. Now that's an opportunity worth looking into. Peace.

Postmedia News is looking for more ways to cut costs

Update: Ah ha, the truth comes out. The Vancouver Province is reporting that Postmedia news is looking for more ways to cut costs. So the fake merger of the Surrey Leader and the Surrey Now had absolutely nothing to do with improving their digital presence. They dont even have their new website up yet. It was simply the same old unimaginative corporate hack of cut cut cut. This is the exact same beef I had with Moya Green many years ago. When you are in a service based industry and you cut all your services, you also reduce business revenue. It's that simple.

Look at how mismanagement is killing the industry. First Postmedia announced it was cutting staff by 20% after it aready fired 3 newspaper publishers to cut costs. They got rid of the chief editor of the Vancouver Province who was completely competent by throwing him back in the field and put the chief editor of the Vancouver Sun in charge of both papers. Now we have reporters from one paper writing for both papers. That in itself is not a bad thing but it has taken us somewhere we perhaps didn't want to go.

Now all the local papers sound the same. The Vancouver Metro, 24 hrs, Sun, Province, they're all the same. All the News is one homogeneous clone show. In their obsession to cut costs they have killed their market. There is nothing unique about the different papers anymore so you might as well merge them all into one since you made them all sound the same.

Part of the problem is listing companies on the stock market. That used to be just to help raise start up capital. Now it has become the norm and that's not a good thing. You can have a profitable company making money but be forced to make cuts because the stock drops in value. We have seen this happen time and time again. .

The only answer the unimaginative one trick pony corporate hacks can come up with is cut jobs, save money. Sometimes that's needed but at other times it's shooting yourself in the foot and kills your business revenue which makes the situation worse. If you own a restaurant and you cut all the items from your menu, not as many people are going to want to come to your restaurant and you are going to see a drop in sales.

Fortunately, there is hope on the horizon. The solution is found within free enterprise. After the corporate hacks kill the industry, independent entrepreneurs can seize the opportunity to form new companies that fill the void and find new markets by providing a digital service people are interested in. That is where the money is and that is where we can save free speech - on the Internet. My traffic is over the roof. 19 million hits and climbing. Over 50% of my readers are reading my blog on their phone. That's why my website is so simple. I dont have time to create a separate version for people's phone. All the disco sh*t doesn't work on people's phones. The blog automatically creates a separate version for cell phones. If you read my blog from a cell phone you can't see the sidebar. You can only see that if you read my blog from a computer. Saving the freedom of the press is within reach. It's found within the free market not corporate mergers.

You can get your Future dies here shirts and bumper stickers from Surrey Shirts.