Looking at the NDP's business plan for BC 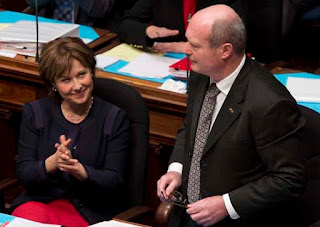 It's pretty bad when the political corruption in BC makes the New York Times and the local media barely mention it. That shows something is seriously wrong with the status quo. This post will shatter stereotypes by helping us look beyond the misconceptions so we can see the facts which stand on their own merit. I saw a commercial with Christy Clark recently and everything she said made perfect sense. Then her Cheshire cat smile at the end made me want to throw up. What she says and what they do are two very different things.

Years ago Preston Manning led a Ron Paul revolution in Western Canada crying out for fiscal responsibility. The people supported it overwhelmingly. It was a right wing movement that rebelled against Mulroneyism and pork barrel politics. We don't want to hear about any more special deals and broken promises. We want you to stop wasting our money and reduce taxes so families and business can prosper. Brian Mulroney had lost that vision completely. He had become worse than the left for spending and taxing. He was the one that force fed us the GST all the while warning us that the other guys would tax and spend while he did exactly that.

Last election I met an old friend who was actively involved with the Reform party federally and provincially and I asked him about the Reform Party in BC. He just said we tried that last time. All we did was split the vote and the NDP got in. Now we're stuck with the Liberals. It was a discouraging prognosis indeed. I submit that the BC Liberals have become even worse than Brian Mulroney at the tax and spend, line your own pockets nightmare. Even Lying Brian didn't make the New York Times. It' all about corporate monopolies and sweetheart deals.

The first lie we must address this election is the false claim that the NDP will tax and spend. No one could tax and spend any more than the Christy Clark government. The NDP opposed the excessive gas tax and support a cap on bridge tolls. The BC Liberals in conjunction with the mayor's glutton council want to tax and spend us right over the moon.

The next lie we need to address is that the NDP are bad for business. That is simply not true. Corporate monopolies are very profitable because they eliminate competition and destroy the free market. The NDP support small business while the BC Liberals do not. That's all there is to it.

Next is the balanced budget lie. The BC Liberals have not balanced the budget. They have manipulated the numbers. They created a tsunami of debt in BC Hydro and keep deferring that debt. They even borrowed a dividend from BC Hydro's deferred debt to balance their budget.

In contrast, John Horgan Is pledging to freeze BC Hydro rates. The critics cry how is he going to pay for that? Wait 'till I tell ye. By fixing the BC Hydro Fraud that Gorgon Campbell first created. By nationalizing the private power brokers that sell power to the public company at above market rates. That obscene fraud has gone on long enough. 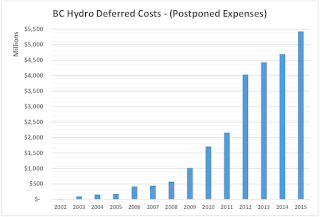 Where will the NDP get money from to fix Christy Clark's unbalanced budget? From BC Hydro. Right now the government extracts a dividend from ICBC. If we were to privatized ICBC that would reduce tax revenue and increase taxes for consumers. When the NDP were in power they were able to extract a dividend from BC Hydro. After Gordon Campbell privatized the power brokers that sold power to BC Hydro at above market rates, that tax revenue was lost. The NDP can fix that and in so doing help freeze hydro rates and increase tax revenue at the same time.

We could even take this one step further and nationalize our oil. That would increase tax revenue and freeze rates as well. That would be a colossal help to taxpayers and consumers alike. We can keep all the private Canadian companies. We just take the profits from our resources out of the hands of foreign ownership and put it into the pockets of Canadian Taxpayers.

The NDP are not soft on crime, the BC Liberals are. The BC Liberals are deeply involved with it. Just ask the New York Times. I met Penny Priddy at Dianne Watts' first crime prevention coalition meeting. I told her about my past Union involvement and she just raised her hand and said I am here because I am a mother. When it comes to crime I am more right wing than my opponents. So is Bruce Ralston and Mike Farnworth.

Harm Promotion is not working. The Christy Clark government is tied to that pharmaceutical fraud, the NDP is not. The NDP supports treatment, the BC Liberals do not. In the last civic election I supported Kirk LaPointe not Gregor Robertson. Kirk LaPointe wanted to get rid of open drug dealing at Main and Hastings. If we had elected him, then the number of drug related fatalities in Vancouver would not have doubled like it has under Gregor Robertson.

Likewise in Surrey, Harm Promotion is killing small business. I did not support Linda Hepner last election. I supported Doug McCallum. Harm Promotion in Surrey and Vancouver needs to stop. That is the only ethical thing left to do. This election we can make a difference if we have the courage to do so. If Alberta can do it, so can we.