The Hard Way Out: New book about Hells Angel betrayal 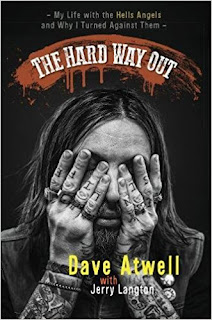 There is a new book about the Hells Angels worth mentioning. It's by former Ontario Hells Angel Dave Atwell and is called The Hard Way Out: My Life with the Hells Angels and Why I Turned Against Them. It is co-written with Jerry Langton. Jerry Langton is rock solid. He spent time in New York as deputy editor for The Daily News. He has put out many credible books including Fallen Angel: The Unlikely rise of Walter Stadnick.

Jerry Langton put out one about the Bacon brothers that was informative and well written. My main concern with that one was the title. The Bacon brothers were anything but notorious. Here in Surrey they are hated for their involvement in the Surrey Six and their ass kissing of the red and white. I'm glad Jerry Langton has put out another book that I can fully endorse.

As I said during my endorsement of the book about Mob Boss Ralph Natale in The Last Don Standing, I dont normally endorse informants. Ralph Natale's case was different as was Dave Atwells. They were both screwed over by people in the game that had lost any dignity or self respect and screwed them over.

Dave Atwell sold drugs for the club in Ontario and got busted. Unlike that Justin Bieber in Cali who infiltrated Vagos, he didn't cut a deal to avoid jail time to become a rat nor was he a crystal meth dealer. He sold weed and 100 Percocets to a woman who worked at the clubhouse and turned out to be a police informant. He was arrested in a sweep with other members and spent 20 months on bail before the charges were dropped. It certainly wasn't a big bust. He wanted out but couldn’t leave because he owed the Hells Angels a huge legal bill, plus house fees.

He started selling cocaine in large quantities for the club and started working for the Ontario Biker Enforcement Unit. Similar to the OMGU here in BC that Christy Clark did away with after their huge success in Kelowna with the David Giles conviction. Atwell said he made $1,700 per kilo of cocaine he sold for the club. It was big business that had nothing to do with riding motorcycles.