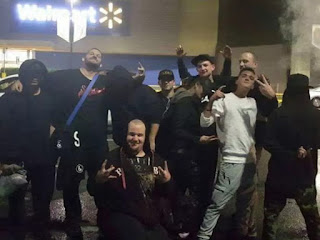 Speaking of scams, since this local fraud is in the news again I will comment on it. CBC is reporting that Surrey RCMP have confirmed the president of a controversial vigilante group in the city was arrested for allegedly assaulting a target during a "sting" on Monday evening. Ryan is nothing but a Surrey drug dealer. He was convicted of possession for the purpose of trafficking in Surrey 2009. Three years before the brutal drug related murder of Janice Shore. As I said from day one, his "crew" look like a bunch of Surrey drug dealers and his criminal record confirms it.

If Ryan was selling drugs in Surrey in 2009, we all know who he was selling for. W 5 exposed Ryan for what he is. A drug dealer committing fraud to scam money from the public.

Ryan now has a second defamation lawsuit going. The second one is someone he targeted for simply disagreeing with him. The guy disagreed with the Surrey chapter's tactics so Ryan posted his picture and said this is what a pedophile looks like. That is dishonest and illegal. Many others have complained about being targeted for simply disagreeing with them. Like I said from the beginning, it is exactly how the drug dealers on the Whalley strip operate. You help us give someone the boots or else we will give you the boots. Now they are running around pretending to be heroes so they can collect money from the public when in reality they are just as bad as the pedphiles they claim to target.

People in Surrey know how the drug dealers on the whalley strip operate. On that strip, the drug dealers are the pimps. They give the sex trade workers drugs then take all their money when they get a trick. Janice Shore was beaten to death and dumped beside the very tree that the Surrey drug dealers demand free service from their sex trade workers as a warning to the rest of the sex trade workers to pay up or end up like Janice. Janice was sexually assaulted and had her head caved in from blunt force trauma all for a nominal drug debt. Like I said Ryan and the Surrey Creep Catchers are no better than the pedophiles they are pretending to save the world from.

Oh really. I'm sorry but their claim fails the test of believability. What is believable is that Ryan is so desperate for money to help cover court costs for lying about people he made up a desperate scam to raise more money. He steps it up and starts pushing the guy and making death threats so he gets arrested then plays the victim trying to raise more money for his scam.

One of the comments left on another thread claims "Ryan took my money when i was a prostitute and used me. I haven't been a prostitute for 7 years now. He threatened me for leaving when i was too sick to work anymore. I ran away. His brother punched me in the head and split my head open." That is believable. If you have money to burn, give it to someone else.

Ryan is just another Jimmy leading a parade of misfits selling snake oil to the public. I dont buy it. Many will. There will always be plenty of suckers that fall for any con. That's why they are so profitable. I'll just sit this one out and let that parade pass me right by. Peace.

The problem is catching predators who are preying on minors. As soon as Ryan said they caught someone trying to have sex with a 6 year old I knew he was full of sh*t. It's is very possible someone would try and prey on a 14 year old and coax them to leave their home and meet for a hook up. That is believable. Someone trying to lure a 6 year old kid online is not believable.

In Edmonton the Creep Caches targeted a mentally challenged young man/woman, went to their place of residence and confronted them claiming they just agreed to have shower sex with a minor. Three points arise. First they went to her residence. They preyed on him/her. (The target had gone through a sex change) Second they said she agreed to have shower sex with a minor. She wasn't the one that suggested it. After being coaxed she agreed to it. The third point is that their mark was obviously mentally challenged and was not capable of instigating a plot to prey on anyone. They took advantage of someone who was mentally challenged to try and make themselves look like heros. As a result the target committed suicide. That whole scenario was disgusting and shameful. There was nothing noble in it.

In the Ryan and the Surrey Girl case the whole hype and drama obsession is toxic. They insist on live streaming their takedowns. The Surrey Girl starts off by saying OK everyone share share share. We want to get lots of views on this. This guy is going to get f*cked up. She admits her need to be a drama queen and she admits that their assault was premeditated. Feeding off the drama like that is unhealthy. Good luck with that.

Then there's the entrapment argument. If an undercover cop walks down the Surrey strip outside the Front Room and a drug dealer gets in his face and says crack!? Crack?! Wanna buy come crack?! If the undercover cop says yes and buys some crack, or fentanyl or crystal meth from the dug dealer then that is fair game for an arrest. If however, the undercover cop goes somewhere else and finds someone who isn't normally selling drugs and says to them you can have sex with this trailer trash Surrey girl if you sell these drugs and the guy says OK, then that's entrapment. He wasn't normally selling drugs and only did so because the cop enticed him to do so. 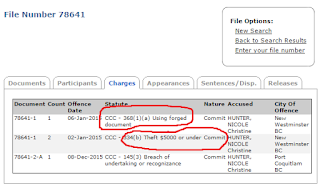 As for Ryan's Surrey Girl who desperately wants to be a reality tv star and posted a video of her trying to convince someone to have sex with her 6 year old daughter, she has a criminal record for fraud and theft. Big surprise. In the video she made reference to her dealer. It certainly doesn't take a brain surgeon to figure out who her dealer was.

Justin Payne is good. Ryan Laforge is not.

Here's a mentally challenged kid that lost his job because Ryan and his Surrey girl with the criminal record for fraud and theft lured him in. The kid met a girl on a dating app that said she was 19. She contacted him. After getting to know her she then claimed she was 14. He invited her to his work to meet her and go on a date not to have sex with her and he lost his job over it. There were no conversations about sex at all. Ryan exploited him for his own personal gain. Ryan is a piece of garbage. He is what we refer to locally as Surrey trash.

Now Ryan is admitting that the previous guy they tricked agreed to pay for sex with his Surrey girl. She "posed" as a sex trade worker and said if you want sex with me you have to have sex with my daughter too. That's not a citizen's arrest you dumb f*ck. You don't even know how to make a citizen's arrest. You didn't observe him commit a crime and you didn't charter him. In their evidence the Surrey girl admitted their mark told them he had never done anything like that before and was simply agreeing with what the sex trade worker demanded. Ryan and his Surrey trash call the cops but refuse to hand over the evidence that might convict their mark.

Then trailer trash Surrey girl posts on facebook with the hashtag #gooflivesdontmatter and #fuckthepolice. She's right about one thing. Their crew of Surrey trash don't matter, the police do. 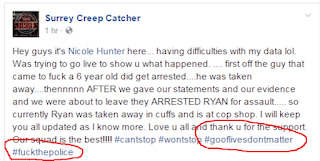 I have a copy of a video Ryan posted soliciting donations from their mark. Ryan says to the mark why don't you do something posative like make a huge donation to sexually abused children or something like that. At 14:00 in the video Ryan says you are going on facebook. If you are really really serious about this being wrong our organization we need all kinds of things man. We need cell phones. I'm just saying. If a donation of cell phones came that would help us find more guys, that would be something posative. That's not extortion. (Yes it is) You asked what you could do. The mark replied and said I'll help you guys out. Then Ryan goes on more about how donating to his organization would be a good thing. W5 exposed Ryan for what he really is.

Party hardy toy soldiers. Pride cometh before the fall so it does.