160 kilograms of cannabis seized in Ontario 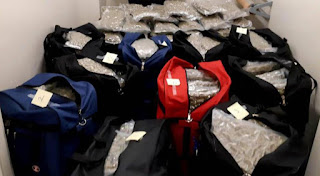 The Canadian Press is reporting that "Police say they found more than 160 kilograms of cannabis after a routine traffic stop in Markham, Ont. York Regional Police say an officer stopped a white van early on Tuesday morning. They say that while the officer was speaking with the driver and passenger, they noticed multiple duffel bags throughout the van. Police say that the bags contained 163 kilos of marijuana. They say two Quebec men have been charged with possession of cannabis for the purpose of trafficking.'

Oh but wait a minute, cannabis is legal now. What gives them the right to seize it? "Police Chief Eric Jolliffe says the illegally produced cannabis likely would have gone to the black market, which fuels organized crime." There is no such thing as illegally produced cannabis. There's just cannabis production without a license. This is not what taxpayers want the police to focus on and taxpayers pay the police's salary.

Aside from the fact that the search was a violation of their Charter Right because there was no just cause for the search, it is also a conflict of interest. Andy Richard's pot company has a retired cop from Ontario in it selling cop pot there. The Hells Angels have just as much a right to sell pot now as the police do.