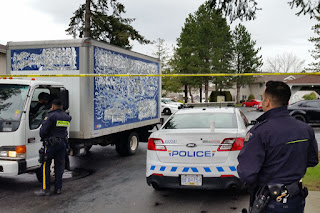 The Star is reporting that "RCMP are investigating after a man was shot to death in Surrey, B.C, overnight. Mounties say multiple calls came in just before midnight reporting gunshots in the area of 72nd Ave. and King George Boulevard. They say a lone male was found at the scene, where he died of his injuries.

The Peace Arch News is reporting that "Police have identified 30-year-old Amrendra Vijay Kumar as the Surrey man found dead after a late-night shooting in Newton."

The Vancouver Sun is reporting that "After Kumar was shot, a vehicle was spotted speeding away from the area. About 40 minutes later, Surrey Mounties were called to the area of 164th Street and 92nd Avenue where a car had caught on fire. 'This vehicle is believed to be related to the earlier shooting and will be seized for further examination,' read a police statement."