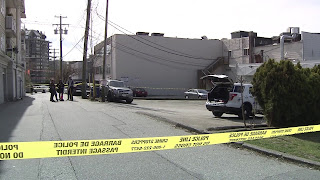 News 1130 is reporting that "The victim of a daylight shooting in North Vancouver is on life support, police say. It happened late this morning in the Lonsdale area, and North Vancouver RCMP are saying it wasn’t a random incident. Witnesses heard gunshots shortly before 11 a.m. in an alley by Lonsdale and 12th. When officers arrived on scene, they found an adult woman with gunshot wounds. She was rushed to hospital in critical condition."

Global is reporting that "Investigators have identified in victim in Tuesday’s daytime shooting in North Vancouver as 32-year-old Ngoc Mai (Anita) Nguyen. Police say they have no reason to believe the shooting was related to drugs or gangs.