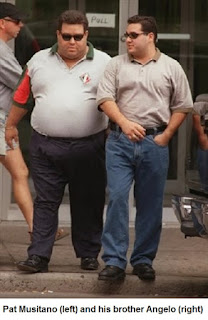 The Hamilton Spectator is reporting that "Hamilton mobster Pasquale (Pat) Musitano has "life-threatening" injuries after being shot multiple times outside his lawyer's officer in Mississauga Thursday morning, the latest in a string of Mafia shootings in the area."

"The reputed boss of the Hamilton Musitano family was shot around 7 a.m. outside the office of lawyer Joseph Irving at 120 Matheson Blvd. E., near Whittle Road. Irving had been acting for Musitano in connection with a paving and construction company. Sources tell The Spectator that Pat was hit as many as four times, including to his head, and was in critical condition when he was transported to Sunnybrook Health Sciences Centre in Toronto."

"The shooting comes amid a resurgence in Mafia violence in Hamilton and surrounding areas, including the homicide of Musitano's younger brother Angelo (Ang) Musitano, who was shot in his Waterdown driveway nearly two years ago, on May 2, 2017. Musitano's own St. Clair Boulevard home was riddled with bullets weeks later in what experts thought was a warning to the Mafia boss. The timing of this latest shooting — a day after the funeral for Pat's uncle, former Hamilton mobster Tony Musitano — and the location are noteworthy, experts say. In other recent Hamilton mob shootings, including Ang Musitano's murder, the targets were hit at home."

So Pat Musitano was shot today and his brother Angelo was shot dead in 2017.