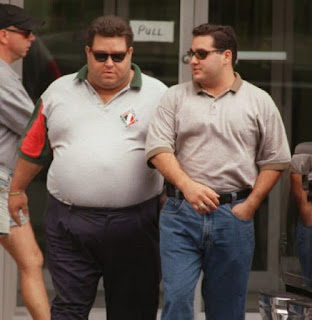 CBC is reporting that "Angelo Musitano, a member of Hamilton's notorious Musitano crime family, has been gunned down outside his suburban Hamilton home. Police say multiple shots were fired at Musitano as he pulled in to the driveway of his home in Waterdown late in the afternoon. He was in the vehicle when he was hit, said police. When emergency crews arrived he was already without vital signs. He was later pronounced dead in hospital. He was 39."

The Star dot com is reporting that Angelo Musitano is the brother of Pat Musitano. Together they were charged with first-degree murder in the 1997 contract killing of Hamilton mob boss Johnny Papalia. Angelo Musitano great-uncle fled Delianova, Italy, a village in Calabria and cam to Canada in 1937. The Calabrians in Hamilton were behind the war o the rizzutos in Montreal.