NDP and the Green Party reach agreement in BC 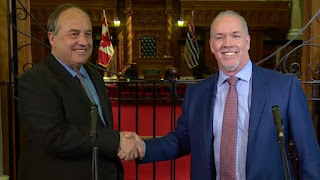 CBC is reporting that "The B.C. Green Party has agreed to support the NDP in the legislature, setting up the possibility of 16 years of Liberal rule coming to a dramatic end."

As I reported on May 10th, the initial results of the BC election saw Christy Clark and her Liberals elected in 43 of B.C.'s 87 ridings compared to 41 for the NDP and three for the Green Party. It takes 44 seats to form a majority in B.C. and Christy doesn't have it so either the Liberals or the NDP have to team up with the Green party to form a government.

Christy Clark cannot form a government when she only has 43 seats and the other two parties have joined together and hold 44 seats. Reporting these results was delayed because of recounts in a few close ridings and the delay in counting absentee ballots. To my understanding the original election results held and now a coalition has been revealed.

The Council of Canadians welcomes NDP-Green agreement in British Columbia. Why on earth would a grass roots democratic organization that supports civil liberty and opposes the waste of tax dollars weclome this agreement? Because the BC Liberals were so corrupt they made the New York Times.

If Christy Clark asks the lieutenant-governor to dissolve the legislature and hold another election and he says yes, then he should be arrested for treason. BC has fixed election dates for a reason. It is time the corruption mentioned in the New York Times comes to an end.