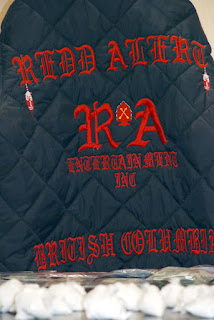 The Vancouver Sun is reporting that "A woman who died in hospital after a shooting in East Vancouver has been identified. Janice Nicole Bryant, a 33-year-old Vancouver resident, was shot in the street near East 7th and St. Catherines Street around 5 p.m. Tuesday."

The Gangsters Out News Syndicate is reporting that this woman was the wife of a Redd Alert member known as G for Glen Nelson. Local Sources claim that G (glen Nelson) was a redd alert member that was the most well known and started the push back in the dtes 5 years ago.

G was shot by the skeena projects last year and survived. He found out he was shot by Steele who was a BC Redd Alert leader. Steele got shot in the stomach on pender street as I reported August of last year. Local sources claim that Steele retaliated the retaliation by shooting G's wife. With friends like that, who need enemies? Redd alert as we all know sell drugs for the Hells Angels and control the drug trafficking in the DTES for them. Not that anybody cares. Just sayin.

Update: On Friday at 8:30 there will be a candlelight vigil in Janice Bryant's honor against gang violence at commercial and broadway. Executing someone's wife crosses the line.

2nd Update: It was a wonderful ceremony especially the ending. They held the ceremony right in the middle of the intersection while police rerouted traffic. It represented the community pulling together against another attack on Indigenous women. The burning sage is sacred. It was an honour to participate in the drum circle. That was holy. Please don't blame Glen. He's hurting too. It's not his fault. He was betrayed by the Hells Angels because he became too powerful and that scared them. There is no loyalty in that game and there are no winners either. The only way to win that game is by refusing to play it. From my holy land to yours, Peace. A Gofundme page has been set up to help with funeral costs and with Janice's daughters education.