NBA Enes Kanter arrested for speaking out against Turkish President 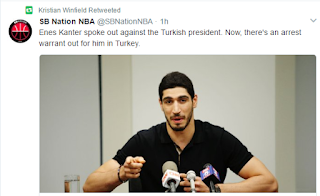 SB Nation is reporting that Enes Kanter spoke out against the Turkish president. Now, there's an arrest warrant out for him in Turkey. The news article states "Oklahoma City Thunder big man Enes Kanter is wanted for arrest by his home country of Turkey, which has accused him of being a member of a terror group, according to AFP."

This is the problematic nature of removing civil liberty for everyone accused of being a terrorist. Once they remove civil liberty from accused terrorists, they accuse everyone that disagrees with them of being a terrorist. The same thing happened in England. With one wave of the pen they labeled everyone who participated in the Occupy movement terrorists and removed their right to a lawyer or a fair trial. This is a bad precedent for everyone.

This whole fraud was fabricated simply because Enes made a post on Twitter that called Erdoğan the Hitler of our Century and accused him of staging the coup and killing off those who opposed him. Enes was right. That fake coup was staged. There ya have it folks. Disagree with the dirty politicians and they'll arrest you for being a terrorist. Get a life and let the brother play ball. 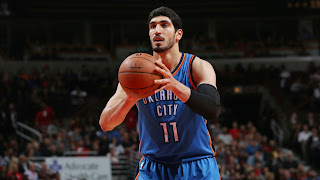