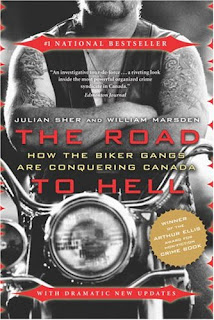 This is why I think the true crime movement would be diminished without Kim Bolan. Kim is reporting that "Former B.C. resident and long-time gangster Rabih “Robby” Alkhalil was convicted in Toronto of first-degree murder May 11 and sentenced to life in prison with no possibility of parole for 25 years." I completely missed the fact that Alkhalil was convicted and sentenced. As we all know locally he was a Hells Angels associate also charged in the murder of rival drug dealer Sandip Duhre at the Wall Centre in Vancouver.

Kim is referring to the murder of Johnnie Raposo in Toronto. The Toronto Sun reported that "Nick Nero, Martino Caputo and Rabih Alkhalil conspired to murder a fellow cocaine dealer so they could steal the dead man’s drugs and divide the enormous profit, a jury heard Wednesday."

This murder in Toronto along with the Wall Centre murder in Vancouver shows the Hells Angels direct involvement in murdering rival drug dealers across Canada. Julian Sher was right. In his book The Road to Hell: How the Biker Gangs Are Conquering Canada he nailed it. What we are seeing now is the validation of everything he wrote in that book. It even ties into the recent murder of Janice Bryant in Vancouver who was not a rival drug dealer. Her husband took back all the drug dealers in the DTES for the Hells Angels. He became too powerful so the Hells Angels killed his wife. That is f*cked up. That is what we are now dealing with.