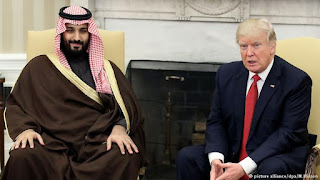 The Independent is reporting that "Donald Trump will use his upcoming Saudi Arabia trip to announce one of the largest arms sales deals in US history - somewhere in the neighbouhood of $98bn to $128bn worth of arms. That could add up to $350bn over ten years."

Although Saudi Arabia is an ali, the concern is who Saudi Arabia turns around and sells those arms to. It's like communist China seling nuclear missiles to North Korea through it's deal to purchase Canadian reactors. Last year Wikileaks reveals how the Clinton's family's charitable foundation received a million dollars for convincing the US to sell arms to ISIS through Quatar and Saudi Arabia. So once again, say hello to the new boss, same as the old boss yo.