Korean election results are in 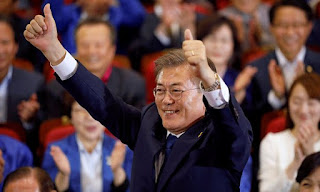 The Guardian is reporting that "Moon Jae-in, a left-leaning liberal who favours engagement with North Korea, has won South Korea’s presidential election, raising hopes of a potential rapprochement with Pyongyang. The former human rights lawyer won 41.4% of the vote, according to an exit poll cited by the Yonhap news agency, placing him comfortably ahead of his nearest rivals, the centrist software entrepreneur Ahn Cheol-soo and the conservative hardliner Hong Joon-pyo, both of whom have conceded defeat.

South Koreans who backed Moon, 64, will be hoping the election result will mark a clean break from the corruption scandal surrounding his disgraced predecessor Park Geun-hye. Hours before polls closed, the national election commission forecast that turnout would exceed 80% – the highest since Kim Dae-jung was elected in 1997." 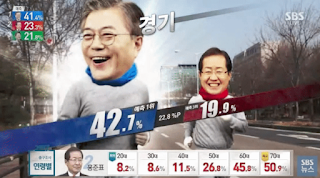 So we have just witnessed a wonderful example of democracy in action within South Korea. There were massive peaceful protests in South Korea where the people demanded the president resign over corruption allegations. He resigned and they had an election to vote for a new president. That is a perfect example of democracy. In contrast, that would never have happened in North Korea or in China. In Tiananmen square when people protested for democracy the Communist government dispersed the crowd with live ammunition.

North Korea calls itself the Democratic People's Republic of Korea. That isn't even a bad joke. It is a bold faced lie North Korea is not a democracy or a free republic. It is a totalitarian dictatorship. There is no voting for leaders, there is no free speech, there is no lawful assembly. There is no civl liberty. No protection from unlawful arrest. Those rights do not exist in North Korea or Communist China. Communism is bad. History had recorded that.

North Korea says it will have dialog with U.S. under right conditions

Spotlight on the 2018 Winter Olympics in South Korea