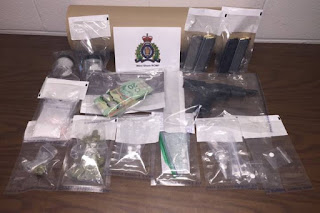 Global is reporting that "Six full-patch member of the Hells Angels gang were arrested during a traffic stop on Vancouver Island. Investigators say West Shore RCMP officers stopped a limousine on Highway 1 near Leigh Road in Langford on Saturday. They say the limousine was stopped after it was seen committing a Motor Vehicle Act offence."

"During the traffic stop, police gathered evidence which led to the arrest of all occupants of the vehicle. When the vehicle was searched, police found a loaded handgun with several full magazines and various suspected drugs such as cocaine, marijuana and other suspected controlled substance in tablet forms."

It will be interesting to hear which names were involved. Langford is home to the Devils Rejects.