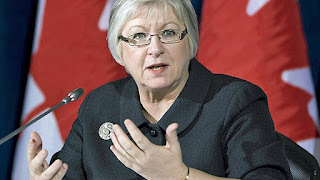 Speaking of the resignation of Bob Paulson and Craig Callen. CBC is reporting that The women who were the subject of Sheila Fraser's review of four lawsuits launched in British Columbia about harassment and sexual harassment hope the the federal government and the RCMP will apply all of the recommendations and bring about actual change within the police force. Public Safety Minister Ralph Goodale asked the former Auditor General to conduct the review after the women contacted him in November 2015, asking for help. They said they had no confidence in the RCMP's internal mechanisms to deal with harassment."

"Sheila Fraser says the four cases illustrate the existing grievance process is "inefficient and bureaucratic" and calls for a panel of outside experts - not police - to oversee harassment complaints and measures to prevent reprisals against those who complain of harassment, and also for health services to be "delivered by an independent external party or parties."

"Fraser reviewed how the RCMP handled the sexual harassment cases of Catherine Galliford, Atoya Montague and Susan Gastaldo and the harassment case of Alice Fox. Her long-awaited report was released earlier this week, along with the report of the Civilian Review and Complaints Commission headed by Ian McPhail." This is an overview of the review Sheila Fraser presented to Parliament and this is a copy of the actual report.