Journalist and photographer from Global arrested covering accident in Hamilton 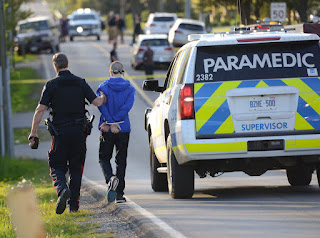 HG Watson from J-Source just tweeted a link to a news report from the Hamilton Spec claiming a journalist and photographer from Gobal were arrested covering an accident in Hamilton.

"While covering the crash, a Global News videographer and freelance photographer were arrested at the scene. The Global journalist was later released. Police didn't respond to requests for comment about the arrests. In a statement, Global News said the agency was 'very concerned by the circumstances' of the journalist's arrest. 'While we are satisfied he was quickly released without charge, the incident merits further investigation and we will be following up directly with Hamilton Police Service,' spokesperson Rishma Govani said in an email."

Update: Metro News is reporting that "A freelance journalist was charged with obstructing police after he and a Global News videographer were arrested while reporting at a fatal collision in Hamilton on Tuesday night. Hamilton police arrested the two journalists around 7 p.m. at Evans Rd. and Highway 5 where a 10-year-old girl died after being struck by a car." I guess the reporter failed to obey the cops direct order to stop filming. That's a civl lawsuit right there. Filming a dead body is in bad taste but reporters have a right to report the news. 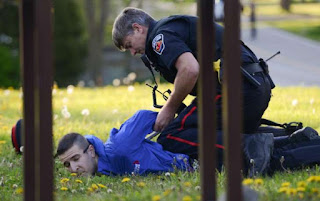