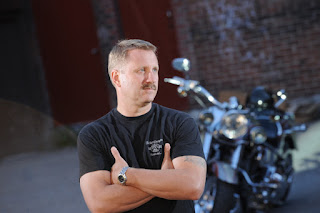 Speaking of the Friends of Craig Callen runnning for the hills, the Times Colonist is reporting that "Suspended Victoria police chief Frank Elsner has resigned, but that won’t halt the disciplinary hearings he is facing for six allegations of misconduct. The Victoria Police Board announced the resignation on Thursday." CBC is reporting that "The Victoria police chief had been suspended with pay since April 2016."

Frank Elsner is from Sudbury where he "associated with criminals and partied with drug users, bikers, and hookers. He set up elaborate drug deals, disappeared for weeks on end, was involved in a hitman operation, and had multiple aliases." This is an example of an undercover cop who goes undercover not because he hates crime because he covets that life. I do not. There is nothing in that life that appeals to me and I think married cops that go undercover to infiltrate the biker gangs because they covet that lifestyle are trash.