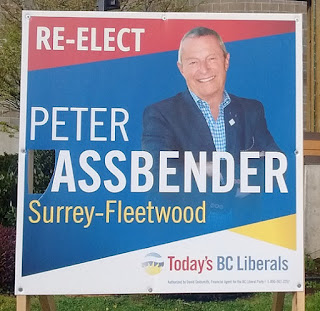 Normally vandalizing election signs is in bad taste but this one was rather humorous. A coworker told me that someone had cut out the F in one of Peter Fassbender's election signs leaving it to read Assbender. Somewhat amusing given the disdain for him in this riding.

In contrast, Chuck Cadman was a local politician well respected and admired. He started off Reform after launching his own nonprofit group CRY - Crime Responsibility Youth calling for greater accountability within the young offenders act. After Chuck Cadman was screwed over by Stephen Harper twice, he ran as an independent and won his seat comfortably.

When Chuck Cadman died of cancer, all over Surrey people started posting his election signs they had saved with the slogan RIP Chuck Cadman and We love You Chuck. Chuck Cadman was so respected because he wasn't a dirty politicians like most of the others. He was someone who genuinely cared. Peter Fassbender in contrast is a complete sleazebag.

Then came Linda. A new social media storm that launched when a BC voter saw Christie Clark in the Grocery store and said she wouldn't be voting for her. Initially Christy Clark's response was fine, stating that's the perk of living in a democracy, but then they went on and on about how it was a NDP plant. They had to backtrack on that statement when they were proven wrong.

This election is going to be a little too close to call. Last election the NDP were ahead in the polls and the public panicked with all the fear based propaganda. That is something I would like to address. No political party is perfect. The NDP has it's strengths and weaknesses like any other. Yet this tax and spend fraud has to stop. The BC Liberal Party has been bad to the bone since Gordon Campbell. Christy Clark was a small step forward but the party did not change and she was quickly consumed in the greed and the poison kool aid.

Its not often BC political corruption makes the New York Times. Everyone says the NDP will tax and spend but their past history with BC Hydro tells a different story. When it comes to tax and spend, the BC Liberals are by far the greatest offenders in recorded history.

Spending obscene amounts of tax dollars on advertising follows the Stephen Harper model of pork barrel politics. Brian Mulroney was suposed to be right wing. He was suposed to be fiscally responsible. He was anything but. His tax and spend gluttony brought in the GST. Likewise, the BC Liberals have brought in a 10 cents a litre regional gas tax, a Translink that burns a billion dollars a year in taxes begging for more and a BC Hydro deferred debt that is off the charts.

I oppose pork barrel tax and spend politics. That is why I oppose the BC Liberals. We need to address BC Hydro's growing deferred debt. The only way to do that is by nationalizing the power brokers that sell power to BC Hydro at above market rates. While we are at it, nationalizing our oil would simply be good business for consumers and tax payers alike.