Pablo Escobar's son claims his father worked for the CIA 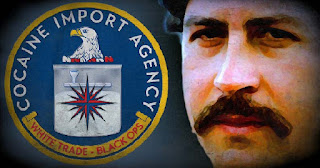 The Daily Star is reporting that Pablo escabar's son said: "In my book, I tell the story of my father working for the CIA selling cocaine to finance the fight against communism in Central America." (Just like Gary Webb discovered in Nicaragua) “What the CIA was doing was buying the controls to get the drug into their country and getting a wonderful deal."

This allegation is believable because it fits in with what we already know about Iran contra at that time. In Operation Watchtower, Colonel Edward P. Cutolo testified that the cargo flown from Colombia into Panama was cocaine. Cutolo also testified the planes were met by Col. Tony Noriega, a Panama Defence Force Officer assigned to the Customs and Intelligence Section and CIA Agent Edwin Wilson.

Oliver North supervised the CIA's cocaine trafficking in Iran contra. Everything he did he was told to do. That is why they made him a Fox TV news host after his pardon. Pablo Escobar got screwed over by the CIA just like Manual Noriega and El Chapo. The CIA have a history of f*cking people over that sell drugs for them.

Posted by Dennis Watson at 2:41 PM