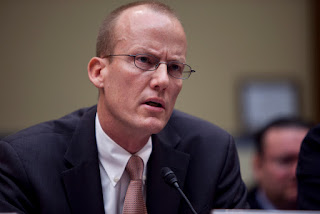 US Senator Chuck Grassy reported that ATF Agents linked to ‘Fast and Furious’ Still Employed despite Agency Recommendation. The ATF’s Professional Review Board recommended that Special Agent William Newell be terminated from federal service. This Pencil neck prick was the clown on the feild in charge of Operation Fast and Furious. He was the spin doctor sent in to rationalize the ATF's involvement in the CIA Operation that was selling guns to the Mexican cartel and bringing back tons of cocaine into the US as payment. After heads began to roll and scapegoats started to fall, Newell was *reassigned* to ATF Headquarters. (They gave the POS a promotion) Special Agent William Newell wins the Gangsters out Dirtbag of the Year award. Prick.