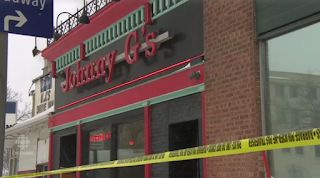 CBC is reporting that "Victims of a double homicide in downtown Winnipeg earlier this week were members of the same street gang, and shot and killed each other, police say. Anthony Brian Cromastey, 30, and Rodney Albert Kirton, 25, died after opening fire on each other inside Johnny G's, a popular late-night restaurant and pub on Main Street, around 1:30 a.m. CT Wednesday."

"The investigation has determined the deceased males died as a result of simultaneous gunshots to each other," said a Winnipeg police spokesperson, Const. Rob Carver, on Friday. Carver said both handguns have been recovered. Investigators used surveillance video and witness accounts to conclude guns were fired at the same time, said Carver. "So the two individuals were basically in a gunfight in a public restaurant and shot each other fatally on the spot," he said.

This incident happened last February but I just fund out about it. Anthony Cromastey had a previous crack cocaine trafficking charge associated with the Mad Cows who appear to be in a turf war with the Manitoba Warriors. The MW are HA rivals so do the math. Shane Edward Kirton was a full patch Winnipeg Hells Angel. I'm not sure if he is related to Rodney Albert Kirton. Lots of gang violence in Winnipeg still.