Four dead after shooting in Penticton 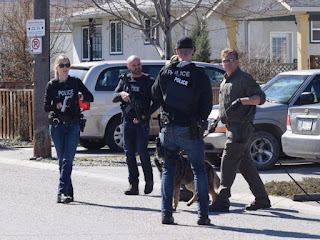 The Canadian Press is reporting that "The RCMP say four people were found dead Monday in three locations after targeted shootings within a five-kilometre radius in Penticton, B.C. Supt. Ted De Jager said a man turned himself in at the city's police headquarters and officers were searching his car. "We're still trying to find the motive for this whole incident, so that's part of the ongoing investigation," he told a news conference.

The Ottawa Citizen is reporting that "South Okanagan-Similkameen Supt. Ted De Jager said emergency services were called at 10:30 a.m. with reports of a shooting outside a home in the downtown area. As police raced to the scene, they received another call, this time from callers in the south part of the city of 34,000, saying more shots had been fired.

When police went to that residential scene, on the 2400-block of Cornwall Drive, they found three people dead in two neighbouring locations. All shootings were within a five-kilometre radius. De Jager said that at 11:30 a.m. a 60-year-old man turned himself in at the city’s RCMP detachment and remained in custody, with homicide charges pending. The four victims — two men and two women — and the person who turned themselves in were all known to each other.

CBC is reporting that "A retired city worker is facing multiple murder charges after a shooting spree left four people dead in the city of Penticton, B.C., on Monday. John Brittain, 68, was charged with three counts of first-degree murder and one count of second-degree murder."