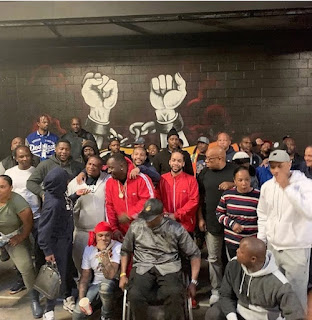 NME is reporting that "One person has been killed and three people have been injured after a shooting which took place during yesterday’s funeral procession for the late rapper Nipsey Hussle. Hussle was memorialised at a service at The Staples Center yesterday morning (April 11) in LA, with the likes of Stevie Wonder, Barack Obama and Kendrick Lamar all paying tribute to Nipsey. The rapper, who was born Ermias Joseph Asghedom, was shot and killed on March 31 at the age of 33."

"Following the service, Nipsey’s casket was driven along a 25.5-mile route through South Central Los Angeles so fans and members of the community, who turned out in their thousands, could pay their respects. During the procession, four people were shot at the intersection of 103 St. and Main St. Los Angeles Police Chief Michel Moore confirmed that of the four victims – who were described as three men and one woman between the ages of 30 and 50 – one had tragically died following the shooting. A suspect in a grey Hyundai vehicle is being sought."

The LA Sentinel reported that "On April 5, gangs from Watts, Compton, Inglewood and the Los Angeles area called for “peace in the streets” to honor the life and legacy of Hussle. Rival gangs marched in solidarity from a local Crenshaw grocery store to the rapper’s Marathon clothing store located in the Crenshaw district where he was shot to death allegedly by 29-year-old, Eric Holder." Madness as in completely insane.