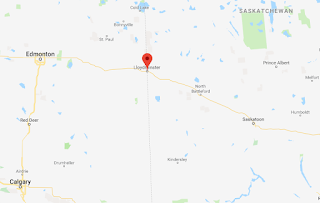 Global is reporting that "Lloydminster RCMP are investigating a suspicious death after a shooting over the weekend. Police said they were called to a residential neighbourhood in Lloydminster, Alta., in the area of 56 Avenue and 31 Street at around 7:40 p.m. Saturday after receiving several calls about shots being fired. When officers arrived at the scene, a man’s body was found inside a vehicle." One source claims the victim in the shooting was Ray Dumont. The woman he was with survived but was hit with shotgun pellets. Sounds like she needs some time with Dr Phil. Robbing drug houses is not a wise career choice.

Update: Global is confirming the victim was Ray Dumont.