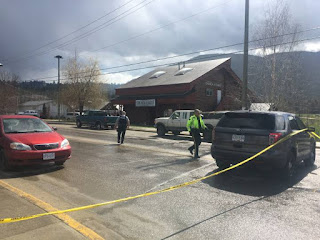 Global is reporting that "Police confirm one man is in custody after a “possible shooting” Sunday morning at the Salmon Arm Church of Christ near the Trans-Canada Highway in the Shuswap. Cpl. Chris Manseau says the area is contained and there is no indication of an active or ongoing threat as officers investigate a “serious incident.” BC Emergency Health Services (BCEHS) says two patients were involved in the incident at the church. One person was transported to hospital via air ambulance. The condition of both patients is unknown."

CBC is reporting that "One man is dead after a shooting at a small church in Salmon Arm, B.C., on Sunday, and police have a suspect in custody. Family members have confirmed that the victim is Gordon Parmenter, an elder at the Salmon Arm Church of Christ. B.C. Emergency Health Services confirmed one person was airlifted to hospital after receiving a call just after 10:30 a.m. about the incident, and a second person was also injured."

CBC is reporting that "A suspect has been charged in relation to a shooting that left one dead and another injured at a small, close-knit church in Salmon Arm, B.C. Matrix Savage Gathergood, 25, has been charged with first-degree murder, aggravated assault and disguise with intent to commit an indictable offence in connection with the Sunday morning shooting. He is being held in custody and is set to appear in court on Tuesday."

Global is reporting that "The senior who lost his life in a shooting at the Church of Christ in Salmon Arm B.C., was also the recent victim of a suspicious fire that destroyed his home. On Sunday, 78-year-old Gordon Parmenter was gunned down during Sunday morning service in the small Shuswap community in the B.C. interior."

Posted by Dennis Watson at 2:45 PM