Bill Fordy is a Flaming Idiot 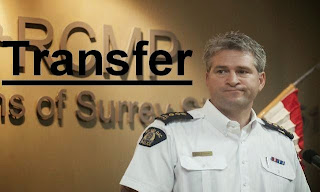 God help us. CTV is reporting that the Surrey Police chief is a flaming idiot. That is, if you can do the math. Bill Fordy spoke to the press recently complaining about how many of the people being shot at in Surrey recently aren't being cooperative with police. Go figure. So instead of posting pictures of the shooters, he is posting pictures of the people who have been shot at. You are such a f*cking idiot it is astounding.

The Surrey Leader is reporting that one person said "Don't worry about it, no need for you cops to be here." No kidding. Since Bill Fordy is completely useless, there is no need for him to be here. He admits the rash of recent shootings involves two groups fighting over drug turf. If you had a brain you'd tell them, alright, since you guys are creating public violence we are going to hit you in the pocket book and start arresting all the drug dealers selling in public in Newton and outside the Front Room. Oh but no, Bill Fordy won't do that because he is a f*cking idiot.

Then he has the audacity to say the two groups are south Asians and Somalins. Somalins?! F*ck off!!! Adam Lakatos and Derrick Bequette are not Somalian. Of course South Asians are involved. After Larry Aamero and Jonathon Bacon were shot in Kelowna, the Hells Angels went on a rampage in 2011 wiping the Dhurry Dhak group off the face of the earth. Randy Naicker was a South Asian. He was a Hells Angels Associate just like Rob Sidhu was. The Hells Angels are quite capable of hiring a brown guy to shoot another brown guy. All these shootings started when Skeeter's bother was found dead.

So let's look at Bill Fordy's incompetence for a minute. He refuses to arrest drug dealers selling hard drugs in public and spends a great deal of his spare time at police functions where a great deal of alcohol is served. Tell them about the police drink up when you shoved toilet paper up your ass when you were naked, set it on fire and wiggled your ass in front of everyone trying to put the fire out. At least they gave it the right name - the dance of the flaming a*shole. No heterosexual male wants to see that and when you do that in front of female coworkers, that is sexual harassment. I can't wait to finally read that court transcript.

Tell them about the sex text your female coworker recently sent to the entire group by mistake instead of to just you. Gotta hate it when that happens. Why do the RCMP keep promoting complete idiots? It would seem it's because they don't want them to actually do their job and arrest the drug dealers like Richard Barszczewski. Let's talk about the climate of unprofessionalism in the RCMP shall we? Bill Fordy is at the root of it. TRANSFER!