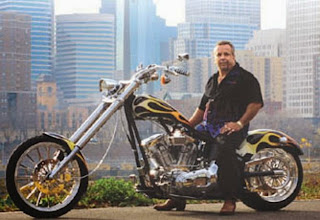 In the US, Fox 59 is reporting that Pat Matter, former president of the Minneapolis chapter of the Hells Angels, admits the Hells Angels are a criminal organization and explains how he made a fortune selling crystal meth for the club. He coauthored a book with the cop that finally convicted him called Breaking the Code: A True Story by a Hells Angels President and the Cop Who Pursued Him. The book details, in alternating chapters, Matter’s history as a biker boss and Omodt’s struggle to bring him to justice. Now that bike doesn't look like a freaking Goldwing.