Suspect stabbing people in the DTES shot dead by police 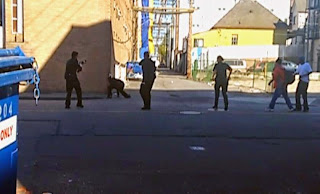 CBC is reporting that "Police say they shot and killed a man in the middle of a stabbing rampage on Vancouver's Downtown Eastside after he refused to drop his knife and began stabbing a woman right in front of them." The video confirms their account which has been posted by CTV.

The Vancouver Province reported that the police responded to a call about a man stabbing people outside First United in East Vancouver. Police fond a man with a knife on the scene, fired a bean bag at him which caused him to drop the knife. Then while police have their guns drawn he picks up the knife and runs over to stab another woman so they shoot him dead. Case closed.

However, there's a bit more to the story. The National Post interviewed the witness who dialed 911. He recently moved to the area from Houston Texas and said “He went crazy and started stabbing people, it was pretty scary.” What the visitor from Texas didn't realize is that kind of thing happens there every day. Tourists often stumble into the area straying from Gastown which is a nice area very close by. Main and Hastings is of course a public drug market that tourists refer to as the Zombie Apocalypse. It remains the perfect example of a failed social experiment.

First United is where many homeless congregate because they offer some meals and sometimes shelter. These are the people the drug dealers exploit. There are a huge number of people in the DTES with mental health issues because they closed Riverview and cut back social programs for the mentally ill. Instead they put them on the street and hand out free crack pipes so they can be self medicated by the predatory drug dealers who give them crack for free then beat the life out of them for payment. It is the epitome of exploitation.

To make matters worse, the City closed the local police station just down the street to public access. That means if a woman is being chased by a stalker with a knife they have nowhere to run. I spoke to a woman in the DTES who said if she was being chased by a stalker she would run outside the police station because they had cameras out front and the stalker would leave her alone because he didn't want to be filmed attacking her. Now they have no place to go. Oh all they have to do is dial 911. The homeless don't have cell phones. It's not the police's fault, it's City Hall's fault for trying to suppress crime statistics and our fault for letting them do it. 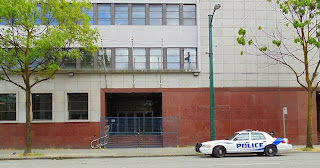