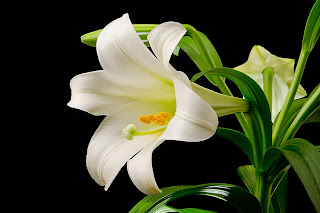 Easter means different things to different people. For some it's chocolate and the Easter bunny. For others it's the resurrection of Christ. I was driving up Oak Street towards highway 99 yesterday past the Jewish area and saw a billboard that said Come home to seder this Passover.

When I was young I worked on a non religious Kibbutz in Israel near Petach Tikva outside Tel Aviv. During passover they didn't have any bread made with yeast symbolic of their historical flight from Egypt. The meal had various symbolic features. I can't remember what the eggs represented but the horse radish represented their historical hardships. Jesus was Jewish.

In Catholic Cathedrals they have various representations of the stations of the cross remembering the suffering of Christ before his crucifixion. Years ago I worked with a Muslim friend from Fiji. He made reference to Mel Gibson's movie the Passion of Christ and encouraged me to watch it. I was somewhat surprised hearing a Muslim tell me that. He said to me it's hard to understand why God would let one of his prophets suffer like that.

Some people think bad things don't happen to good people. Yet Paul taught if we don't endure trials we aren't children of God we are children of someone else. Christ said if they have called the master of the house Beelzebub, how much more shall they call them of his household.

Many years ago an Indo Canadian asked me, if Jesus died on the Friday, why do Christians call it good Friday? It kind of caught me off guard and my fist reaction was it's kind of hard to explain. Christians believe he suffered for us but was resurrected making it possible for everyone to one day be resurrected and judged. Christians use the Easter lily to represent the resurrection since it blooms at Easter. In Ireland, republicans who support a free republic use the Easter lily as a reminder of the Easter rising and the Irish Proclamation which put their dream on paper.

They also use the Easter lily as a symbol for the Easter rising because it is green, white and orange just like the tricolor flag of the Irish Republic. Green represents Catholics, Orange represents Protestants and White represents peace between the two. A noble dream indeed.

You don't have to be Jewish to have traditions. Traditions are a good thing. In the Ukraine they make magnificent bees wax decorated eggs. Whatever your traditions are at Easter, enjoy them. There's more to life than what can be found in a crack pipe. Peace.

"He is despised and rejected of men; a man of sorrows, and acquainted with grief: and we hid as it were our faces from him; he was despised, and we esteemed him not. Surely he hath borne our griefs, and carried our sorrows: yet we did esteem him stricken, smitten of God, and afflicted. But he was wounded for our transgressions, he was bruised for our iniquities: the chastisement of our peace was upon him; and with his stripes we are healed." Isaiah 53:3-5

"But Zion said, The Lord hath forsaken me, and my Lord hath forgotten me. Can a woman forget her sucking child, that she should not have compassion on the son of her womb? yea, they may forget, yet will I not forget thee. Behold, I have graven thee upon the palms of my hands; thy walls are continually before me." Isaiah 49:14-16 He came in the name of love so he did - U2.