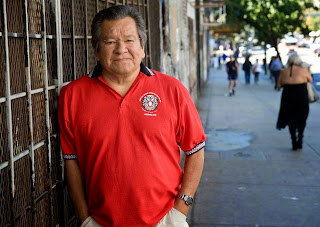 The Vancouver Province ran a profound editorial comparing Harper's Bill C-51 throwing away the Charter of Rights with an old law that once banned First Nation members from holding potlaches. The editorial is by Bill Wilson who states:

"Former prime minister John A. Macdonald’s Conservative government passed a law banning the potlatch and the sun dance in 1884. This law lasted until 1951. In 1921, a potlatch was raided on Village Island and 45 of my people were arrested. Three were immediately let go, 22 were given suspended sentences and 20 men and women were sent to Oakalla prison farm in Burnaby."

First, I think this is astounding. I had no idea that there was ever a law banning the potlatch or a traditional dance and it is incomprehensible why they created it. Yes it happened a long time ago but the point is it did happen. Today, thanks to the Charter of Rights, that law would be illegal. However, this law is the perfect example of how racism is rooted in ignorance.

Anyone who knows anything about First Nation traditions knows that the potlach is an innocent positive friendly celebration like Christmas in a sense. They invite guests in, they give gifts, it is totally positive. The motive for banning such a positive event is baffling. John A. Macdonald is known as a good guy but this law certainly wasn't.

This law is reminiscent of a darker time in Canadian history where civil liberty wasn't always protected. When I moved to Surrey in grade five my best friend was Japanese. I had no idea that during the war everyone of Japanese ancestry was rounded up in concentration camps in Canada. Obviously no one was tortured in these camps but their land was taken from them and it was never given back. This insane act has be rationalized by the claim that it was to protect the Japanese Canadians when we were at war with Japan yet that rationalization is a lie. Stealing their land and not giving it back had nothing to do with protecting them from public animosity during the war.

Later on after high school I had another Japanese friend. He was the best man at my wedding and I was the best man at his. Sadly neither marriage was successful but my point is, he was a really nice guy. I spoke at his wedding and addressed some of the old concerns on both sides of the family about mixing cultures. I said Martin Luther King had a dream that the day would come when a man would be judged by the content of his character not by the colour of his skin. I declared that my Japanese friend was a man of integrity who I trusted and respected.

His family had land on Salt Spring Island that was taken from them during the war when they were rounded up into concentration camps. Years later they received a letter of apology but their land was never returned. My point in all this is that civil liberty is a colossal concern. It is very important. Bill Wilson is right, banning the Polach was absurd just like this Bill C-51 is. The only difference is that today we have the Charter of Rights making the bill illegal.

I was on an e-mail list of several non profit organizations that are very much posed to Bill C-51 for obvious reasons. In England as soon as Parliament passed a bill removing the right to a fair trial from terrorists, with one sweep of the pen they labeled everyone protesting in the Occupy movement as terrorists. Removing someones right to a fair trial for their political beliefs or for participating in a protest is illegal.

Nevertheless, some of these NPOs are all excited that Harper might agree to a few amendments to the bill. The bill is illegal. Amending it is not good enough. We need to scrap it and if it is not scrapped we need to make a legal challenge in court. That's all there is to it. Civil liberty is important. History has shown us how easily it can be lost.