Nobody likes a liar

Nobody likes a liar. That's what pisses me off so much about the Hells Angels. They are compulsive liars and false accusers. Just like the father of all lies whom they serve. Shakespeare once said "Me thinks thou doth protest too much." In context, that saying means a person was denying their lie so passionately it became suspicious. Under Shakespeare's pen Julius Caesar said "Et tu Brute?" Meaning you too Brutus? You have betrayed me too, as Brutus was pulling the knife out of Caesar's back. Back in Belfast, when someone killed someone or blew something up they would always accept responsibility. Didn't matter which side. It could have been the Provos, the INLA, the UDA or UVF. Someone would say yeah that was us. The Hells Angels never accept responsibility for any of their many murders. Never. In fact they have even been known to attend the funeral of people they contracted the murder of. That is the epitome of a rat.

The thread about Brandy Sarionder's murder has gone off the charts. So has the denial. Even if Brandy did commit suicide, which I do not believe she did, anyone with a brain and a heart would say damn those Hells Angels. Their harassment of her killed her. That is clearly true. Yet it goes far beyond that. Gary Webb committed suicide. He shot himself in the head twice. That is not believable. In Mena, Arkansas a crooked corner was caught falsifying death records deeming many murders as suicides. Yes there are a lot of people that do commit suicide. Yet murdering someone and making it look like a suicide is nothing new either.

In Halifax Larry Pace admitted to murdering William Wendelborg for the Hells Angels. They knocked him out with a baseball bat and injected him with a lethal dose of cocaine. Larry plead guilty to accessory to murder and served ten years less statutory release. Larry now goes by the name Lars and lives in Kelowna. When I posted that a troll lied and said he was under witness protection and I shouldn't post that. He didn't cut a deal he served his time. That troll lied because they wanted me to take the truth off the internet. The reason that case is relevant is because Chad Karylchuk‏ sold drugs for the Hells Angels and died of a drug over dose. That murder was never investigated even though it fit the same MO Lars did in Halifax years before.

Which brings us to Brandy. If Brandy really did commit suicide we should reach out to her and her family of friends to mourn her loss. Especially since she was such a celebrity who stood up to the Hells Angels boycott for so many years. We should feel rage for the harassment and abuse the Hells Angels inflicted on her.

In my previous thread I commented on the troll that called in to the Vancouver Province as soon as I made my post about her death pretending to be Brandy's friend and lied about her. They said she was planning on opening a new club but couldn't find an investor. She did open a new club - the Granville Strip. Business was booming. Now the dissinformation machine is denying Brandy was involved in that new club. Yeah an independent club just popped up all by itself after the Hells Angels have effectively wiped out all the other independents in the Province. Not likely. 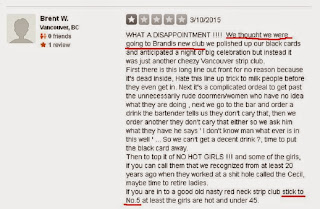 Independent of my sources which claimed she did help get it going, this fake troll review is proof the troll was under the impression that Brandy was involved with it and is the reason why they were trashing it and recommending the Orange Number 5, a Hells Angels dive instead. Obviously anyone who works at the Granville Strip is scared to death and is going to deny Brandy was involved at all simple because they are all now fearful for their life. It's not very surprising how that works when someone gets murdered and that murder isn't even investigated.