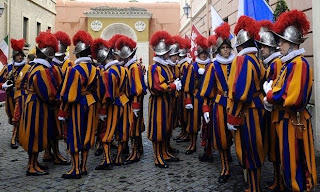 "In these online interactions, the priest admitted to sexual relationships with other religious figures – as well as members of the Vatican’s elite Swiss Guard – using the internet to find new partners and engage in sexual encounters online. Following the involvement of Archbishop of Taranto Filippo Santoro, the individual involved was immediately removed from office, once the “reliability of the facts” had been established." The Independent also reported that four were arrested after the police busted a gay prostitution ring in the Vatican back in 2010. There were similar allegations in 2013. A former commander of the Swiss Guard made similar allegations in 2014. No offense but I did always wonder about those outfits.

Meanwhile, "Father Gratien Alabi, from the Democratic Republic of Congo, is under investigation for murder following the discovery of female bones under the flagstones of an ancient mountain chapel. The bones are anticipated to belong to Guerrina Piscaglia, 50, who disappeared from nearby Arezzo in Tuscany last year, The Times reported. The case has generated intense media interest, with some papers claiming that Father Alabi had engaged in an affair with the woman, a parishioner of his and another priest’s church, and fathered a child with her. Pretty bizarre allegations. There's something about pictures of nude nuns as well. That's pretty sacrilegious. 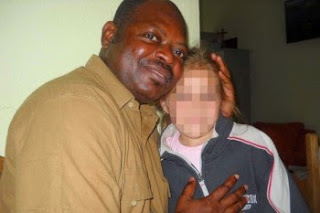 Locally Metro News is reporting that A former Saskatchewan hockey coach has pleaded guilty to sexually assaulting young boys. Ryan Chamberlin, who is 39, pleaded guilty Monday to three counts of sexual assault and one count of child luring. Chamberlin was a hockey coach in several southwest Saskatchewan communities. He had also helped coach a volleyball team at Centennial Elementary School in Swift Current in fall of 2014.

Here's my point. Just because a hockey coach sexually molests young boys, that doesn't mean that hockey is bad, just that particular coach. Likewise within the church. Although the amount of religious hypocrisy is rampant in the church and is one of the reasons I believe in God but am not dogmatic, it doesn't mean God is bad. If someone who makes a promise to serve God breaks that promise, that's not God's fault. Mother Teresa was an amazing person who walked the walk. No amount of religious hypocrisy will ever change that.