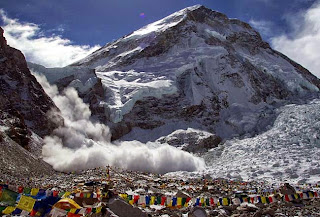 MSN New is reporting that tens of thousands of people were spending the night in the open under a chilly and thunderous sky after a powerful earthquake devastated Nepal on Saturday, killing nearly 1,400. The earthquake triggered an avalanche at Everest base camp, killing at least 10 people and sparking panic. A Google executive is among at the 10 killed at base camp. Google has launched a "person finder" tool for Nepal to help people find loved ones and "is working to get updated satellite imagery to aid in the recovery effort". A Facebook page has also been created, which has been liked more than 5,000 times. Quebec climber Gabriel Filippi, present at Everest base camp, said on his Facebook page that Quebecers there with him were unharmed.