Pelican Nebula above the Lions 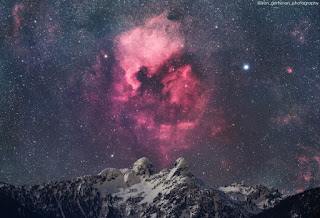 Vancouver is Awesome is reporting that "A Vancouver astrophotographer is sharing a remarkable image of two nebulae glowing vibrantly above The Lions. The jaw-dropping snap features the North America and Pelican Nebulae beaming above the mountain peaks, in several shades of pink and red." Liron Gertsman, a 20-year-old astrophotographer told the news outlet that he took the picture January 21st 2021. It's remarkable. In fact it's unbelievable.

I think it's a double exposure. It's a picture of the Pelican Nebula over top a picture of the Lions. I've never seen a nebula in Vancouver with the naked eye. I thought you needed a telescope to see that. However, this site claims you can see it with the naked eye. If this picture is real, that is astounding. Like a stellar bioluminescence. I will say this, surfs up. Fresh snow on the local mountains. The sun finally came out today and the local mountains were stunning.

Update: Liron Gertsman states that the picture of the Lions was taken with a time elapsed camera which reveals things the naked eye cannot see. On his website he has examples of his astrophotography. My father used to take time lapsed pictures of meteor showers or of the stars around the north star but this nebula thing is a whole new world.

Posted by Dennis Watson at 2:58 PM