Time to reign in growing extremism 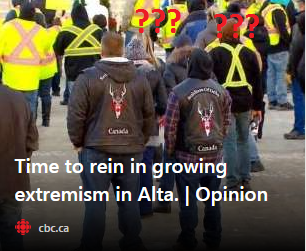 CBC is stating that "It's time to take action against growing extremism in Alberta." They're quite right but why stop there? If we are going to confront extremism in Canada we have to start with CBC and Post Media News who are promoting Communism with a barrage of lies. That is as extreme as you can get. We saw Communism in Cambodia and in East Berlin. That is the extremism we must now confront. It's time to stop funding the CBC with tax dollars.

We need to ask ourselves, why did the CBC single out Alberta? It's because Alberta is conservative and is being completely screwed over by the American Democrats who cancelled the Keystone pipeline and cut off the oil to Ontario and Quebec refineries. They have every right to express their concerns at this time. CBC targeted Alberta because they voted out the Liberals.

Their picture of targets was of the Soldiers of Odin and the yellow vest protesters. Instead of taking note of the concerns the peaceful protesters are expressing, they claim it's time to reign them in because that is what the left does. The left does not permit diversity of opinion.

Initially I had concerns with the Soldiers of Odin because they were anti-immigration and I am pro-immigration. However, there are many other issues that I do agree with them on. Opposing lockdowns and masks in but one. The CBC propaganda stain claims that anyone who objects to the lockdown or to wearing a mask should also be reined in. That is insane. Unlike the Communist Manifesto which Justin Trudeau flaunts, the Canadian Charter of Rights protects the freedom of affiliation and expression. The CBC does not. It's time to Defund the CBC.

If we are going to reign in extremists, we need to include ANTIFA. Everyone is Anti Fascist. Those anti Fascists are Communists because they claim that anyone who disagrees with them is a Fascist which is absurd. Communism and Fascism are the same thing. We do need to confront that kind of extremism and the polarized insanity the Main Stream Media is bombarding us with.

Since the Capital Hill riot is being used to rationalize this attack on civil liberty, we need to examine it. This clown from QAnon standing in front of a green screen claims that Donald Trump incited him. WTF? That's like saying listening to a musician incited me to commit murder. We are all responsible for our own actions. The reason he and many of the Black Lives Matter protesters present were creating violence at the Capital Hill riot is because they were agent provocateurs.

Think about it. The election fraud case was never heard in court. There was plenty of evidence and plenty of irregularities. People had every right to be mad. If someone was sincerely outraged over the election irregularities, they would not turn around and testify at Donald Trump bogus impeechment trial claiming he incited them. It doesn't make sense. The only reason they are sayingf that now is because they were planted at the protest to create violence and then blame Donald Trump for it. That is why the BLM rioters were there creating violence.

I support Donald Trump and I do not believe Biden won Arizona. The CBC is worthless.