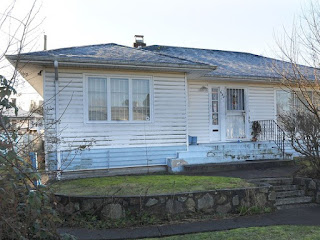 The Vancovuer Sun is reporting that "Two men have been charged in the killing of a 78-year-old woman after a violent home invasion. Vancouver Police said Pascal Bouthilette, 41, has been charged with second-degree murder, while Sandy Parisian, 47, has been charged with manslaughter. On Sunday morning, Usha Singh was found badly injured inside her home near Queen Elizabeth Park after she was allegedly attacked by two men who gained entry by Rape camp relocated. posing as police, Vancouver Police Sgt. Steve Addison said Wednesday."

"Singh was taken to hospital with grave injuries, but died Tuesday. Addison said police arrested the two suspects in east Vancouver Tuesday. Parisian was taken into custody near Strathcona Park with help from a police dog. VPD investigators also executed a search warrant in Strathcona Park, where they encountered a volatile and hostile crowd of about 50 people. The park has been the site of a homeless camp since June." Parisian lives in a tent at the park.

That is the Oppenheimer Park Rape Camp relocated. It needs to be disbanded. It is not advocating for homeless it is advocating for crime and violence. Glenda Luymes used to be with the Vancouver Province. Now she writes for both papers. Glenda is a good person.