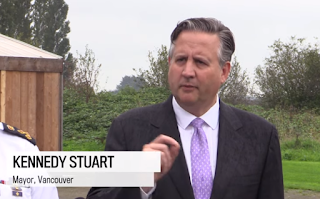 The Vancouver Sun is reporting that "Sex assaults, shootings, stabbings, and swarmings present an ongoing public safety risk in and around Oppenheimer Park, senior Vancouver police officers said Thursday, as they publicly called for a court injunction to clear the ongoing tent city in the Downtown Eastside park." This is absolutely true. I completely support the court injunction to disband that camp. It is full of exploitation and lawlessness.

You know it's bad when former NDP MP Kennedy Stewart starts to complain about it. That's because he's concerned about the sexual assaults and the level of exploitation and violence that exists in that camp. I supported the Woodward Squat but this has nothing to do with supporting homelessness. This is about confronting crime and supporting law and order.

I've talked about how for many years we used to take youth to the DTES to hand out food and clothing to the homeless. I've talked about how the the women would tell our female leaders that they normally stay away from Pigeon Park now because it is not safe for them there. At the time there were tents set up at Pigeon Park as well. They would tell us that women get raped in those tents and nothing gets done about it. The exact same thing is happening at the tent city in Oppenheimer Park around the corner. Letting that continue is not right.

Women's rights in the DTES