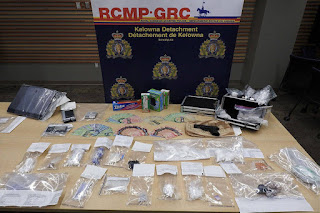 The Peace Arch News is reporting that "The Kelowna RCMP seized approximately 1.5 kilograms of illegal drugs along with a stolen handgun and large sum of cash after executing three residential search warrants last week. Police also arrested two alleged drug dealers and said more arrests will be made."

"According to police, on Sept. 19 the Kelowna special enforcement team, with the assistance of the Kelowna target team and drug unit, executed a search warrant at two rental units on Academy Way and a third search warrant in the 1400-block of Glenmore Road North. Two men in their 20s were arrested at the scene and now face several drug trafficking charges."

"During the search, police found fentanyl, heroine, oxycodone and methamphetamine and also searched and seized a 2012 Acura TL as proceeds of crime." A 2012 Acura? Lame.

It would be nice to know how much of each drug was seized because it sure doesn't look like 1.5 kilos in the picture. Nevertheless, this is a good thing. Kelowna is doing something Surrey and East Vancouver isn't. In 2016 the Kelowna RCMP Street Enforcement Unit made a drug bust as well. That's after the 2012 Kelowna Summer Jam when the OMGU was disbanded and the Gang Task Force became compromised.

One has to wonder, if anyone in Kelowna is still interested in law enforcement, why aren't they arresting Arnie Miller who is selling drugs and pimping for the Kelowna Hells Angels out of the Garden of Eden? Letting Arnie continue makes anything else they do look suspicious.