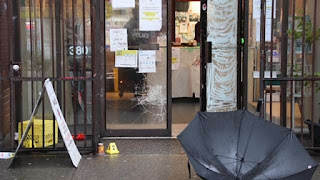 Global is reporting that "Vancouver police are pledging more boots on the ground in the Downtown Eastside following a trio of shootings in just 15 hours. The first shooting, Sunday around 4 p.m. near Hastings Street and Dunlevy Avenue, left a 50-year-old Surrey man with serious injuries, police said."

"A few hours later, a shooting near the International Village Mall at Pender and Abbot streets left a 28-year-old Langley man and a 25-year-old Surrey man with serious injuries, according to police."

"Then, around 6:30 a.m. Monday morning, a Global News crew reporting in the DTES heard the third shooting and called 911 when they saw a man with a handgun flee. That shooting injured a 50-year-old man."

The DTES is a toilet. The tents at Oppenheimer park aren't the problem, the government's drug promotion is. The Four Pillars program has four pillars not just one. The government has turned harm reduction into harm promotion because they have abandoned the other three pillars of Enforcement, Treatment and Prevention. Now they don't prevent anything they just promote addiction. You want the Portugal model? Then implement mandatory treatment. That is the Portugal model. I support the New York model which succeeded because of Enforcement.

Wherever you let drugs be sold and used publicly, violent crime in that area skyrockets.

Enforce the law. Arrest the drug dealers. That saves lives and reduces crime.

Failure to do that is criminal culpability in the crime and violence.