Iran did not attack Saudi Arabia

CNN is admitting that Iran's foreign minister Javad Zarif denied Tehran's involvement in weekend attacks on Saudi Arabia's oil facilities. "Zarif was unable to provide proof that Houthis launched the drones and missiles. 'I cannot have any confidence that they did it because we just heard their statement,' said Zarif. 'I know that we didn't do it. I know that the Houthis made a statement that they did it.'" That's like ISIS claiming responsibility for something in Syria. Who is ISIS? The CIA created ISIS to justify American intervention in Syria.

Arab News is reporting that "A claim from Yemen’s Houthis they were responsible for the attack on Saudi oil facilities is not very credible, France’s foreign minister said on Thursday. “Yemen’s rebels have announced they have triggered this attack. That is not very credible, relatively speaking,” the minister, Jean-Yves Le Drian, told C News television. 'There is an international investigation, let’s wait for its results. I don’t have a specific opinion before these results,' he said, adding the investigation into the Saudi oil attacks will be fast."

Every crime has a means and a motive. The Houthis don't have sophisticated Drones. The CIA does. This is another Operation Ajax orchestrated to steal Iran's oil just like in Libya and Iraq. 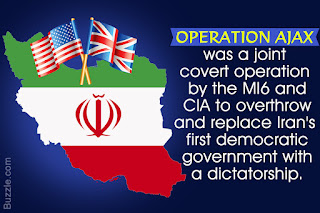