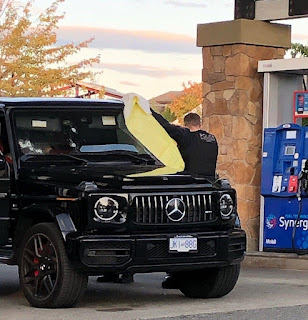 The Peace Arch News is reporting that "Shots rang out at a Clayton-area gas station in Surrey on Saturday at around 6 p.m. One person was shot several times in a Mercedes SUV at the Mobil gas station, in the 18600-block of Fraser Highway. 'One male has died from his injuries,' Surrey RCMP tweeted. A masked suspect reportedly approached the SUV and fired up to 10 shots before running from the scene, according to a freelancer at the scene."

Still no word on the name of the victim in the south Surrey fatal shooting September 6th.

Update: News 1130 is reporting that the victim was a 29 year old man from Surrey and was known to the police. Police found a burned out silver sedan around Willingdon and Kemp in Burnaby between 6:30 PM and 8:00 PM which they believe to be associated with the shooting.

Second Update: The compromised BC Gang task Force told Dr Kim that the victim in the Clayton Heights shooting was Kristijan Coric. They once again gave her the exclusive so she would print their other falsehoods for them which I will address in a separate post.