Justin Trudeau is an idiot, but he's not racist 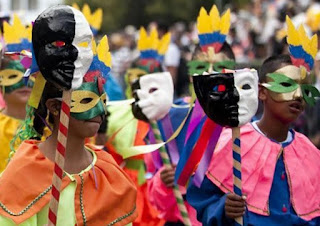 I wasn't going to comment on this because it is such a nonissue but since the Main Stream Media is obsessing over it I will comment on it to set the record straight. Everyone is freaking out about how Justin Trudeau dressed up as Aladdin one Halloween and had a brown face as part of the costume. The Neo Cons also released photos of him wearing a black face in a costume. Well let me tell you, I don't think many Neo Nazis would do that.

When my older sister was young she had a black face for a costume one Halloween. Now that would be considered inappropriate but I can tell you that my sister was never racist and her costume was in no way whatsoever mocking black people. In Columbia they actually have a carnival where black people will paint their faces white and white people will paint their faces black. Here that isn't really considered appropriate. There it is an annual tradition that celebrates cultural diversity. Take a walk in my shoes so to speak.

When we look at the candidates this election and ask ourselves which ones are racist, Justin Trudeau doesn't make that list. Maxime Bernier's anti immigration party does and Andrew Sheer is not far from it. I didn't vote for Justin Trudeau last time round. I voted for Thomas Mulcair because he supported a balanced budget and the decriminalization of pot as opposed to legalization. This time round Jagmeet Singh wants to legalize all drugs and I can't accept that.

I don't have a problem with Andrew Sheer. I do have Conservative values. However, I really don't like his attack ads. Justin Trudeau never said he was going to balance the budget. That's the problem. He said he had no intention of balancing the budget. That is my primary concern with Justin Trudeau. However, I really don't know if Andrew Sheer would be any better because Stephen Harper and Brian Mulroney weren't. They were tax and spend Neo Cons.

There was one thing that Stephen Harper did that was right and that was get rid of the long gun registry. I support civil liberty. I support the Swiss Model for gun control and I support the New York model for dealing with drug and gun violence but let's be honest, Justin Trudeau is not the racist. So lets start looking at the issues not the smoke and mirror distractions.

A Green Party Candidate wore a brown face in a skit about Gandhi. Stephen Harper wore a brown face dressing as a native. That one was OK because natives painted his face. So what's the difference? We need to look at the issues not the circus side show.

Now, as for the issues, Justin Trudeau is a complete idiot but he is not racist.