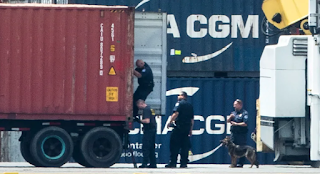 The Star Vancouver is reporting that "Bring back law enforcement on the dock says Delta's top cop." I agree. "In 1997, the federal government eliminated the Ports Canada Police, and 18 years later, Vancouver’s port authority stopped funding a waterfront policing program."

"Once the port authority pulled out, the number of officers solely devoted to policing ports in the Vancouver area fell from 13 to nine - and today, the number is zero, said Neil Dubord, chief of police for Delta, B.C. For Dubord, responsible for policing a Vancouver-area municipality that is also home to Canada’s biggest container port, that’s created an alarming policing gap in an area where organized crime is known to flourish." Exactly. That should be an election issue.

1.6 tons of cocaine seized at Port of New York

15.5 tons of cocaine seized in Philadelphia