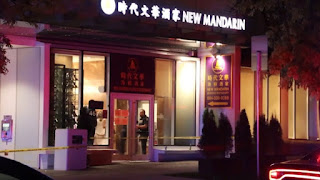 CBC is reporting that "Two separate shootings in Vancouver late Saturday night and early Sunday morning have left two men in hospital with serious injuries. A 44-year-old man was shot multiple times outside the New Mandarin Seafood Restaurant, near Kingsway and Gladstone St. in the first shooting, which happened around midnight. Police blocked off access to the restaurant and portions of the road as they investigated. Footage from the scene shows a bloody pile of clothing laying in the street while officers took stock of what happened. The second shooting happened in the Downtown Eastside at around 4:30 a.m. PT Sunday." The victim, a 35-year-old man from Surrey, was found by police near East Hastings St. and Heatley Ave.

This is why the BC Government should not profit from crime. It promotes gun violence.

Update: The compromised BC Gang Task force told Dr Kim that the victim in the shooting outside the New Mandarin Seafood Restaurant was a member of the UN. I will deal with the other absurd claims in a separate post.