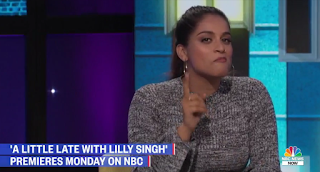 CBC is reporting that "As she blazes a trail in late-night entertainment, Lilly Singh has some celebrity heavyweights to help mark the path. The Toronto-raised YouTube sensation says a slew of stars have reached out to offer support ahead of the Sept. 16 debut of her talk show, A Little Late with Lilly Singh." NBC posted a couple of sneak peaks. The show debuts at 12:35 a.m. ET on Global in Canada, an hour before it airs on NBC in the U.S. Global posted a preview as well.