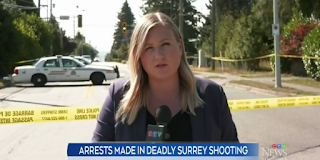 CTV is reporting that "Two suspects are in police custody following a fatal shooting in South Surrey early Friday morning. Surrey RCMP say they were called to an altercation on 160th Street near King George Boulevard shortly after midnight. Mounties say when they arrived at around 12:30 a.m. they found man with gunshot wounds. The 46-year-old, who was located inside the home, did not survive his injuries. In a brief message posted on Twitter, the Surrey RCMP said the altercation happened inside a home, but did not provide further details about what happened."