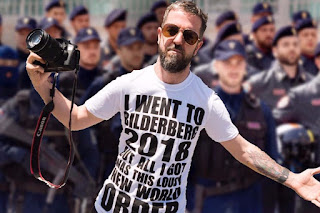 Recently someone sent me a link to Dan Dicks website Press for Truth and I am clearly impressed. Dan is providing a sound alternative to the main stream media. He's also a vlogger that making news reports on YouTube.

Recently he made a profound blog post and YouTube video about the Via Rail bombers and how they have been granted a new trial. He points out that FBI agents were involved in that case to help facilitate the crime just like with the Surrey pressure cooker fraud. In the Surrey case, the RCMP who were *tipped* off by CSIS, were found guilty of entrapment because they completely facilitated the crime. Without the RCMP there was no means or motive to commit the terrorist attack. The suspects weren't only bribed with large sums of money, they and their family were threatened with violence if they did not comply.

Dan nails it when he expresses the shared concern that these fake terrorist attacks that are facilitated by police, are used to rationalize the destruction of civil liberty for all citizens.

Recently he also made a profound blog post and YouTube video about the Totalitarian Interference in children's Gender. He points out that "In British Columbia you must be 18 years old to vote, 16 years old to drive and provincial recommendations on ear and body piercing call for parental consent for minors, under the age of 19…But taking hormones to suppress your biological gender is entirely up to the child according to the Canadian government and BC courts." He has a valid point. Parents have rights and responsibilities as parents. 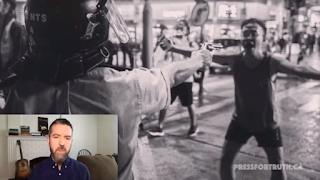 Dan also made a profound blog post and Youtube video about the Communist government of China using live ammunition on the protesters in Hong Kong. Dan provides a needed alternative to the Main Stream Media. He has also experienced censorship on Facebook.

Although there are many issues Dan and I are in complete agreement on no two people agree on every issue. Dan leans toward Maxime Bernier which is his right. I do not. I see Maxime as anti immigration which takes us back to the Harper election where the slogan was I don't hate my neighbor, they make me samosas. Or in my case, falafels. Diversity makes us strong.

Although I agree Climate change is being exploited and there is no real climate change emergency, we all know pollution is bad. For a while, aerosol cans were destroying the ozone layer. So we made a course correction and stopped using aerosol cans. Likewise, spilling 40,000 litres of oil into Edmonton's drinking water is a valid concern. As are the billion dollar bills for clean up the oil companies are regularly dumping on tax payers. .

Dan also has a romantic ideal of anarchism which I do not share. When I was in high school I made a t-shirt that said Love Peace and Anarchy. It was a joke. It was mocking John Lennon's song Imagine. Just smoke a joint and be excellent to each other. If only. The problem with that idealism is that not everyone shares the common goal of the betterment of society.

Most people are selfish and only care about me first. That is why exploitation exists. That is why drug dealers, pimps and police all need to be accountable. I do not support the Anarchists and Communists that are teaming up to create violence in protests because I know their end game. Saying those aren't true anarchists is inaccurate because that is what anarchism really is. In contrast I believe in the preamble to the Canadian Charter of Rights. I believe in the supremacy of God and the rule of law. That is the opposite of anarchism.

Having said that, Dan Dicks is very intelligent and a great news source worth watching. Regardless of who we watch, we all still need to use our brain. Think. It's your unalienable right.

Posted by Dennis Watson at 7:29 AM